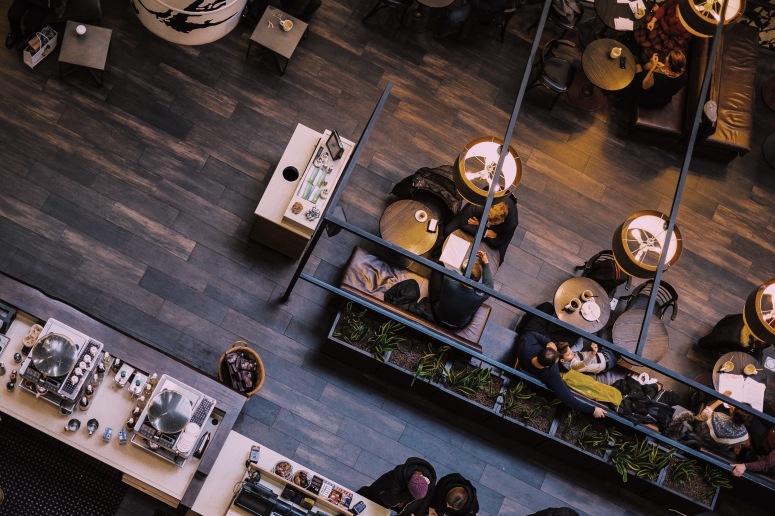 The changing face of the workplace.

Much is being written about the changing face of the workplace, remote working, coworking spaces along with the pros and now cons of open-plan spaces. I was pondering this as I sat in a busy city café between client meetings last week and it struck me that maybe open-plan offices were a contributor to the cafe’s success.

It seems the close-to-office-café is now a place to gather, to share weekend stories, to have a little whine about the working day, to laugh, to recharge, maybe to have an awkward conversation in relative privacy and of course to drink coffee. At around 10am in any office precinct, you’ll see a steady stream of purveyors of the black stuff ready with their refillable cups and loyalty cards. I recall hearing a couple of years back that a large top end of town legal practice in Sydney had employed their own baristas to circumvent the frequent exit of associates for their coffee fix. But I’m not convinced it’s a coffee fix. I think it’s more likely a simple reflection of the continued evolution of the workspace. If it were all about the coffee, the in-house barista would have worked. But it didn’t. So, I’m thinking it’s not about the coffee – or rather the coffee is the hygiene factor in this whole work-break thing.

What came before the cafe? I don’t remember heading out for a morning or afternoon coffee when I first started work (and yes, coffee existed them!). I do remember a water cooler with little paper cups and people would make their way to have a piccolo sized cup of water and engage in a social chat. But a piccolo cup of water hardly does the trick in 2019 because we need to guzzle three litres of the stuff each day and that would mean no time at your desk. Plus the paper cups are an absolute no-no.

Then there were the smokers – they had an excuse when finally smoking was banned inside office buildings. They had to have their fix and could, therefore, take a well-earned break because they were addicted and so we need to forgive their 15-minute absence each hour. Then they had to start hiding behind big wheelie bins and in dark alleys when the ban was extended.

It seems people have always been looking for quick work breaks sans guilt. But now that our daily water consumption is in megalitres, the watercooler chat has all but disappeared. And with open plan offices, socialising just for socialising-sake is very visible, and people feel exposed. When you could duck into someone’s office for a quick chat, that visibility wasn’t there. We can’t use a smoke as an excuse, and even if you did, you’d be flat out finding a smoking-buddy, so it’s now all about the coffee. Baristas, your future is assured (but not if you are in-house!).